The Alarming Fallout from Inequitable and Lost Learning Opportunities 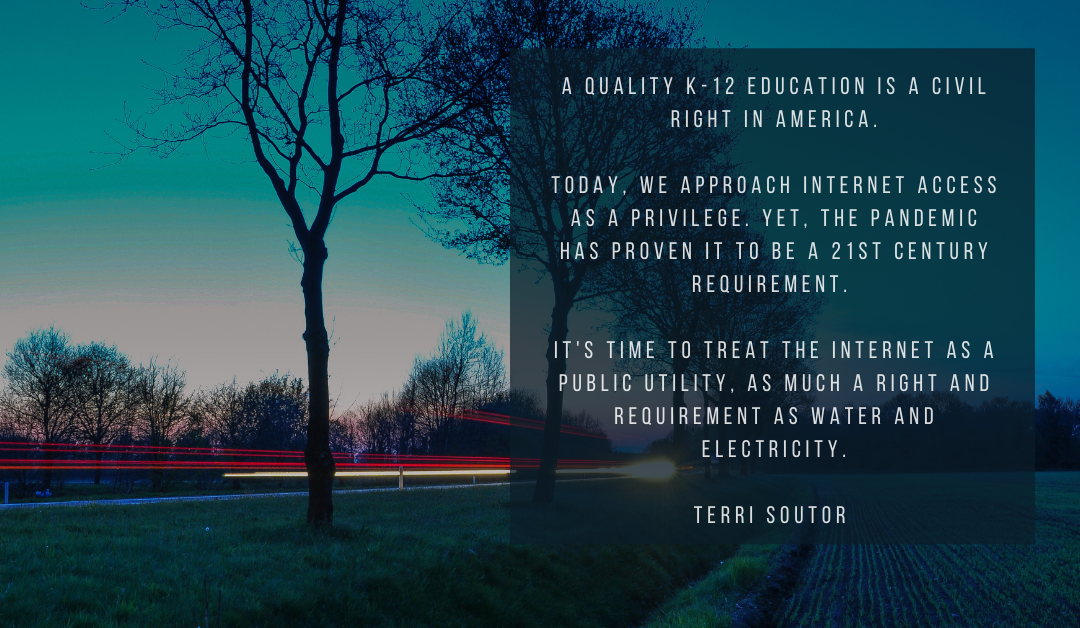 One year ago, mere weeks into the COVID-19 pandemic, Forbes published an article raising this question: “is access to the Internet a right or a privilege?” To this, I say, great question. Let’s do consider the critical notion of establishing the Internet as a public utility. No longer just a resource to search and socialize, given the reliance we each have on it for critical daily activities (education, business and commerce, etc.) and connections, isn’t it time to make reliable, high-speed Internet access ubiquitously available and accessible as water, gas, and electricity? Broadband influences life and industry as we know it to such a degree that it warrants public investment and oversight. This is the most direct and effective way to ensure access that enables an equitable society.

As a professional who’s worked in the education industry for two decades, witnessing the crippling interruption to learning for millions of children who have not had access to the Internet (let alone a suitable device for learning) has been agonizing. Internet access has and will continue to play a critical role in advancing educational equity. I’m certain that many underestimated the number of households that were unable to accommodate distance learning when school buildings and public libraries shuttered last spring. It was one of the biggest challenges that school districts faced during the pandemic. Reliable Internet access in the homes of both learners and educators was an assumed, fundamental utility when distance learning became the requirement for all or a portion of a child’s access to teaching and learning. That was a false assumption, and if we truly want to think about educational equity and change, we must acknowledge that this is not a new or temporary problem.

When US schools closed last March, roughly a third of K-12 students (16 million) lacked access to a working device, reliable high-speed Internet, or both for online learning outside a school building. Using CARES Act dollars, discounts offered by broadband providers and partnerships with private companies, states and districts mobilized to connect students and enable online learning as quickly as possible. Those efforts certainly helped but came far short of the need. As of December 2020, a full nine months since the start of the pandemic, the number of students impacted by the so-called “digital divide” was only narrowed to about 12 million—still far too many students who’ve remained unconnected or under-connected, particularly as online learning continued in almost half of US schools. Bellwether Education Partners estimates that as many as three million American children have missed all formal education, in-person or virtual, for almost a year.

The majority of efforts deployed during the pandemic were non-permanent solutions, and three of four solutions put in place during the pandemic will expire in the next one to three years based on current funding sources according to Common Sense Media. In one Iowa district, for example, local telephone companies set up wifi connections to keep students online for remote learning, and several churches opened their doors to provide socially distanced space for students to work on their laptops. There were many stories of districts that deployed wifi-enabled school buses into neighborhoods that students could connect to, as well as stories of families parking in fast food restaurant parking lots to access wifi.

Southern states with large rural populations have the highest percentage of students affected by the divide. Students of color are disproportionately disconnected. While Black, Latino, and Native American kids comprise 40 percent of the US student population, they account for 54 percent of all disconnected kids. And students from low-income families (those earning less than $50,000/year) make up just 30 percent of students but 50 percent of those who’ve experienced connectivity issues.

The San Francisco Federal Reserve Bank this month estimated that educational disruptions during this pandemic may increase the number of high school dropouts over 10 years by 3.8 percent, while also reducing the number of college-educated workers in the labor force. This will shrink the incomes of Americans for 70 years until the last of today’s students leave the workforce, the bank said. In other words, these disruptions will have a lifelong impact on children, as well as impact the economic wellbeing of our country for nearly a century.

Examining Internet access (or the lack thereof) more broadly to the general US population is illustrative of a macro divide. The Federal Communications Commission (FCC) estimates that nearly 6 percent of Americans don’t have access to fixed high-speed internet. That number mushrooms to 22 percent of folks in rural areas and nearly 28 percent of the population in tribal areas who lack access. And some experts suspect that these numbers may vastly underestimate the problem. That means a big chunk of the rural United States is still living in the 1990s when it comes to Internet connectivity and speeds. Having watched the COVID vaccine rollout over the past several weeks which has been almost entirely reliant upon online notifications of eligibility and online appointment sign-ups, I wonder how that’s working to ensure Americans in rural and tribal areas who are disproportionately vulnerable to COVID get access to the vaccine when Internet connectivity is at issue? Like education, public health has also relied upon the Internet. So similarly, shouldn’t we begin to get serious from an infrastructure investment, funding, supply chain, and policy perspective to make the Internet a public utility?

Perhaps progress is on the horizon. In his “Plan for Rural America,” President Biden pledged “to expand broadband or wireless broadband via 5G, to every American.” As part of the effort, Biden promised $20B to build rural-broadband infrastructure, as well as a tripling of the amount of money available to organizations, local governments, tribal groups, and corporations to wire rural communities through the United States Department of Agriculture’s Community Connect program. This only addresses the rural area problem though, not the “it goes by my house but I can’t afford it problem,” which is significant. The Federal COVID-19 relief bill passed in December, allocated billions of dollars to expand broadband access to low-income families, a billion dollars to wire tribal lands, and millions of dollars for distance learning and telemedicine. For its part, the FCC approved an emergency subsidy for low-income households to get high-speed internet, an effort to bridge the digital divide that has cut off many Americans from online communication during the pandemic. The commission unanimously agreed to offer up to $50 a month to low-income households and up to $75 a month to households on Native American land for broadband service. The FCC will also provide a one-time discount of up to $100 on a computer or tablet for eligible homes. Several legislators on Capitol Hill have called for expanding the E-Rate program to cover residential connections as well, reasoning that homes have become classrooms and are therefore eligible.

The aforementioned Forbes article posed the question, “is access to the Internet a right or a privilege?” Today, we approach Internet access as a privilege. I contend that this pandemic has shown the Internet to be a 21st century requirement to meet many of the basic needs of a healthy, productive life. A quality education is a right, and the Internet has become a required and critical tool to delivering it. The end of the pandemic is unlikely to reverse that notion. While the price tag will be high, a systematic and coordinated approach may prove less expensive than piecemeal, short-term, stop-gap measures. It’s time for government and private organizations to focus funding, policies, and plans towards a public digital infrastructure that builds the capabilities for the Internet to be reclassified as a public utility in America. Every child in our country should have an equitable opportunity to learn, which in 2021 requires reliable, high-quality Internet access. Indeed, doesn’t every American need universal access for equitable opportunities to basic needs? I believe the answer is yes.